About US | Shop at Store4G

Huawei have released a new Huawei B525 CAT6 4G router which is as a replacement for the popular Huawei E5186 CPE in the past two years. Now, for many users who want to buy a Huawei LTE CAT6 CPE, they would be confused about the two versions, such as the following: 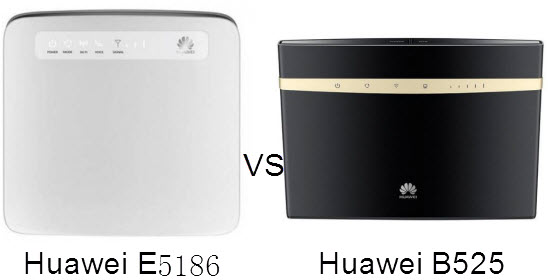 B525s is newer than E5186. As far as functionality is concerned, they both support LTE-A and have interfaces for two external antennas. I do not know how with the performance of these devices? Is there a difference?

Frankly, for single user who wants to buy Huawei LTE CPE, they usually have the similar question. There are slight differences between Huawei LTE CPEs which normal users cannot discriminate it. For example, the Huawei E5186 and B525 are both LTE CAT6 CPEs. Let’s take a view of the following difference between the E5186 and B525.

Appearance
Huawei B525 is the latest desktop router LTE from Huawei, which is in smaller size than E5186. With the dimension of 163 mm x 52 mm x 226 mm, there are power, Wi-Fi, signal strength, network mode and LAN/WAN indicator at the front panel of the B525. At the back interface of the B525, there are 4 x RJ45 ports for WAN/LAN, 1 x RJ11 port, 1 x USB port and power adapter plug. And there are also two connectors for external antenna.
For the Huawei E5186, the dimension is 194 x 177 x 64 mm, and there are power, network mode, WiFi, voice and signal indicators on the front panel. Two external antenna connectors, 4 x RJ45 ports for WAN/LAN, 2 x RJ11 ports for VoLTE and telephone, 1 x USB port for storage and power adapter plug on the back side.
From the appearance, we could get small difference from the B525 and E5186, one is with 1 RJ45 port, and the other is with 2 RJ45 port.

LTE Band Lock Feature
The band lock function is supported by Huawei B525, which cannot find in E5186 CPE. That means you could lock the B525 router to a specific MHz range from the setup menu of WEBGUI. This is a useful feature when the operator has overlaid networks in the area and retrieving the fastest and / or most secure network in your area.

As the two most cutting-edge connection technologies in today’s communication field, 5G and Wi-Fi 6, have been widely used in many terminal devices. Huawei 5G

Compared with mobile networks in the 4G era, 5G has several times the advantages of high bandwidth and low latency. Take 5G smartphones for example,

From the 5G network formally enters the consumer’s vision, the topic of 5G terminals has become the focus of the industry for a while. 5G

No spam, notifications only about new gadgets & updates.